Or from the pets themselves?

Probably almost every fan of dogs wondered on Monday when at first sight such a medallion was made and how the very thought of goods was born. In fact, in English the term “dog etiquette” is translated as “dog etiquette”. For the first time reporting dog labels were put on … soldiers. 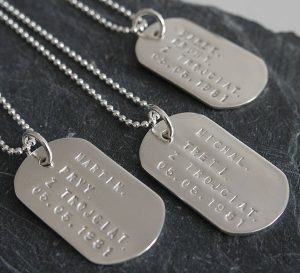 It dates back to the Civil War in the States. Before a decisive battle in 1963, some soldiers wrote down their names and the part in which they were serving on a piece of paper and attached them to their garments with pens. At the same time, other soldiers did the same, but in pieces of wood, drilled a hole and tied them to their necks.

It was not until 1906 that the first circular aluminum discs were introduced, which since 1913 have been made necessarily by the military. During the First World War, the name, rank, serial number, military unit and religion of each soldier were inscribed on them.

The shape of the labels has changed over the years – round, elliptical, double-concave, etc., but their primary purpose has been retained – they have kept brief important data for the soldiers to use in the event.

The Beginning of Dog Medallions

But as long as we dealt with the soldiers, let’s get back to the dogs. The beginning of the dog medallions can be found in 1943. At that time the so-called. Dickin Medal by Maria Dickin. At that time, the Second World War was raging and many animals showed courage and prudence in rescuing not only their owners but also other injured people. That 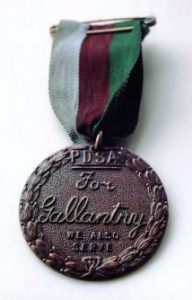 is why this bronze medal was inscribed: “For Courage” and “We serve, too.”

In the period 1943-1949, 54 Deakin Medals were awarded – 32 pigeons, 18 dogs, 3 horses and one ship cat. To this day, this award goes out to our wordless friends in the ensuing military conflicts that, with enviable courage and sacrifice, help in delivering medicines and messages or directly rescue the victims.

I also remember the first years of our native “democracy” – at that time a lot of purebred dogs came into Bulgaria. Many people wrote down names, addresses and phones on slips of paper and somehow affixed them to the inside of their pet’s collars. Then there were some aluminum rings fastened with metal rings.

We have reached the present day. A very ordinary and necessary item, such as a dog pendant, can be turned into a work of art, a wonderful souvenir and an unforgettable gift, and nevertheless used as intended. It depicts the breed of your pet and can add his name and your phone number that if God forbid, the people who find him will return him to you.

Please follow the link and find your breed. If you or your invaluable friend wants to have something beautiful, contact us at the contacts listed.

Check out other souvenirs.